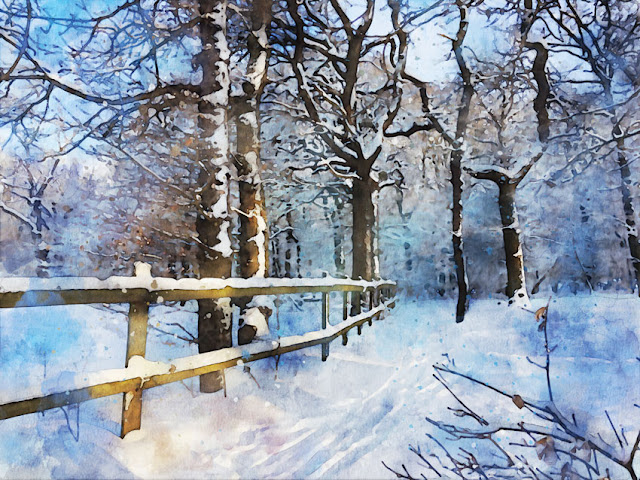 This year’s virtual Christmas card from me to you is a little different - this image was based on a photo I took during the great snowfall of 2018 in nearby Belfairs Woods. Walking alone through the park, shin-deep in snow, with more snow falling, in eerie silence and not another soul in sight was a magical experience. Anticipating that I wouldn’t have the time to draw anything as elaborate as the film-themed illustrations as I have been doing in recent years, I chose this scene and digitally manipulated it (for want of a better description). I hope it captures some of the magic that I felt that day.

Apart from the fact that it has been quite an extraordinary year for pretty much everyone on the planet, I’ve had somewhat of a disastrous end to 2020 domestically too. At the start of October our bedroom ceiling collapsed about an hour after the Geen Geenie and I had risen for breakfast and thus avoided being crushed by falling hundred year old lime and horsehair plaster in our sleep. 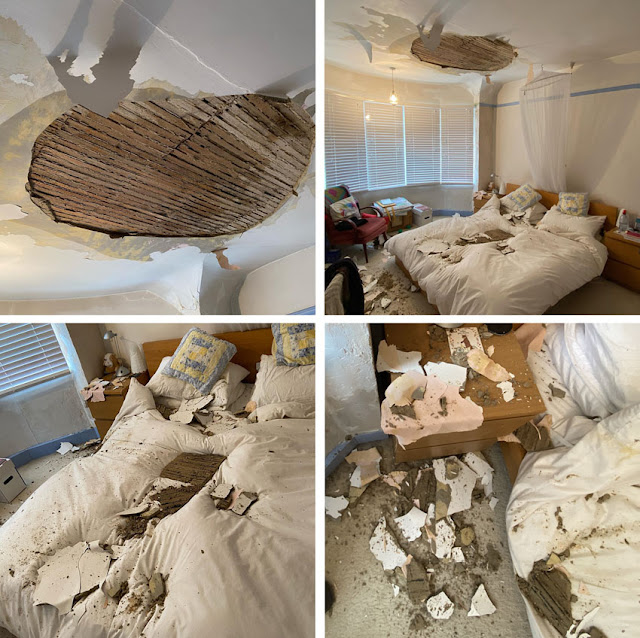 Thanks to a combination of Storm Alex and a hitherto undiagnosed leaky roof, there was substantial water ingress which soaked the plaster and caused the sudden catastrophe. I was on the phone to the insurance company within the hour, but finding available roofers, scaffolders and plasterers at short notice became an almost full-time project management task. As further problems were uncovered, electricians, plumbers and decorators were also contacted. The act of merely trying to obtain quotations for works was a nightmare in itself if the tradesmen even deigned to show up at all. Eventually though, everything got done, in sequence, and the carpet fitters were booked for today, so we could be back in the bedroom for Christmas. Except that they called yesterday to say all of their available fitters were self isolating due to Covid-19 infections.So, we will continue to be sleeping on a mattress on the living room floor for another couple of weeks yet. And that’s fine, because there are many far worse off than us.And it’s barely worth mentioning that in the past couple of weeks one of my teeth disintegrated requiring a new crown, my television sound system stopped working, my car spectacularly failed its MOT (road safety certificate) and required extensive repair, meaning that it’s already been a very disrupted and very expensive Christmas period.Earlier in the year, those who follow me on social media might be aware that I suffered a  recurrence of my irregular heartbeat (atrial fibrillation) which required more drastic treatment this time around and I was admitted to Southend University Hospital for an electrical cardioversion - which is essentially an electric shock to the heart under sedation. And thankfully, that seems to have fixed the problem. My heart is beating to a regular drum right now, but recent adjustments in my medication has left me with a recurrence of chronic migraines and fatigue, but I am working on that now too.Is he going to even mention Strangehaven? Yes, he is:Even with all that, I can’t pretend that it hasn’t been a frustrating time creatively, with absolutely nothing new being released this year. My health issues and other factors mean that a couple of other projects that I had intended to pursue this year have effectively been put on hold for now; but I sincerely hope to make one or two announcements regarding Strangehaven in the coming months. For now, here are a couple of pieces of non-spoilery artwork from forthcoming episodes. Not terribly exciting on the face of it, but as I get closer to Strangehaven’s conclusion, it’s becoming harder to select any artwork without giving too much away, and from experience, I know that many of my readers don’t want to know anything ahead of time.

Meanwhile… remains on hiatus. I believe there is some news in the pipeline about that, but it has already been announced that publishers Soaring Penguin Press will be moving to a crowdfunding model. Exactly what that means for Meanwhile… and Strangehaven remains to be seen, but I will of course continue to work on the last few chapters regardless of external factors.I’m also regretful that I couldn’t celebrate Strangehaven’s twenty-fifth anniversary in any meaningful way like a special publication or small celebratory event. But like I said on my blog post here, working for a quarter of a century on something isn’t an achievement in itself. Hopefully there will be the opportunity to celebrate properly once it’s finally completed. 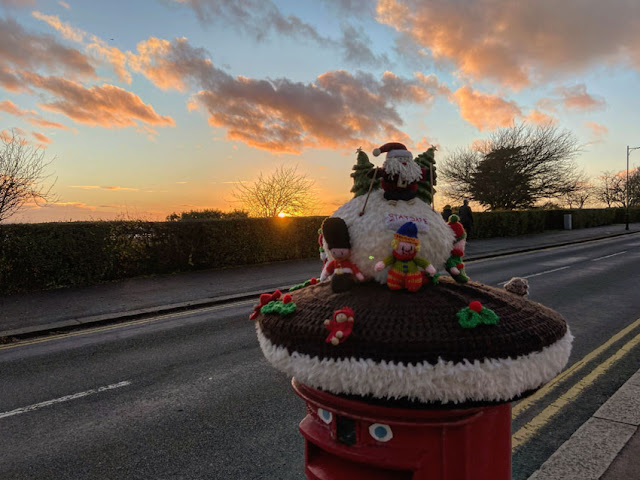 I am still posting photographs from my regular walks around Leigh-on-Sea (among other things) on my Twitter and Instagram feeds although I’m no longer posting those every single day. Next year I fully intend to start posting more artwork and work-in-progress on social media, now that I have figured out a more convenient way to do so, as, after all, I am supposed to be an illustrator.

Don’t Give Up Hope

I just received a delightful Christmas card from one of my loyal and infinitely patient readers who never fails to send me one, with the inscription, “I must say I have given up hope to ever see the ending of Strangehaven.” My friends, please don’t give up! It’s coming, albeit slowly.

Many others have included with their greeting a sentiment that next year can’t possibly be as bad as 2020 has been. But it seems we’ve all been saying that for several years in a row now. As I’m writing this, London and the south east of England are in the freshly-created tier four lockdown (“Stay at home. Cases are very high in your area”) due to the new N501Y variant of the coronavirus, effectively cancelling family Christmas get-togethers only days in advance. Most countries are banning air travel from the UK, and France has just closed the border crossing which will likely lead to food shortages next week. And then on January 1st the Brexit transition period ends. All of this succinctly summarised by BBC presenter Ross Atkins and gloriously parodied by the incomparable Cold War Steve, who if you not already following on Twitter, then please do so immediately.

But, vaccinations are being rolled out so hopefully there’s an end to this pandemic in sight and there will be a grown-up in the White House so it’s not all bad news. As I seem to say every year in this Christmas message, things don’t always turn out as good as we might hope, but they are rarely as bad as we fear.

And I will be locked down over Christmas with my favourite person in the world, a freezer full of food, stacks of blu-ray discs, and piles of books and comics. And I honestly couldn’t wish for a better Christmas than that.

Here’s hoping you all are able to share this holiday period with the ones you love the most, and that 2021 is a happy and healthy one for you and yours.

Posted by Gary Spencer Millidge at 16:18

Gary, what a wonderful 'blogg'! Scary, interesting, beautiful and 'mindful'. Wishing you and Geenie all the very best and can only hope that we can, once again, meet up and enjoy ourselves in 2021. xx

Wishing you all the very best for 2021 Gary.

Healthy, safe, and soon-to-be-ceilinged-and-carpeted. In 2020, this absolutely counts as masterful gameplay.

Very best wishes for both the holidays and the New Year!