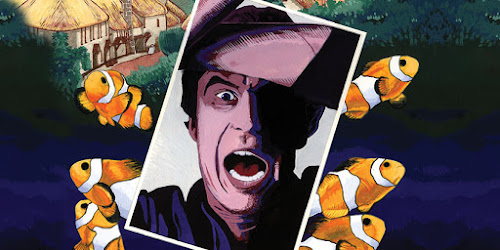 Twenty-five years ago, the first issue of my self-published comic book series Strangehaven shipped to distributors. According to a fax document from the Texas-based printing company Brenner (who I used for the first few years), Strangehaven #1 shipped to Diamond on 29th June and to Capital City and other distributors on the 30th.

Yes, “Capital City and other distributors” – there were still multiple distributors of comic shops back in 1995. Aside from Capital, Heroes World and Styx International also preordered copies of the first issue. Orders exceeded the distributors’ minimum required level by some distance, and I knew that I could continue to self-publish Strangehaven for the foreseeable future, and hopefully indefinitely. 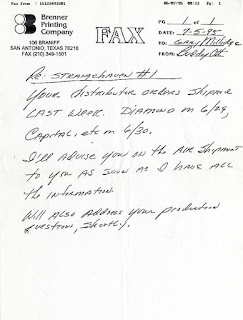 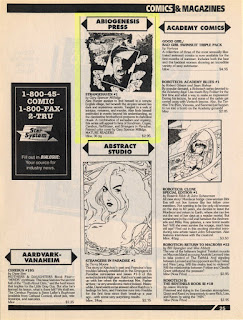 Left: Fax from Brenner Printing with ship dates.
Right: Solicitation for Strangehaven#1 from Diamond Previews catalogue, June 1995.
So, if you had told me in 1995 that I would still be creating new Strangehaven stories twenty-five years later, I would have been overjoyed. If you had told me that I would working on volume four, then maybe not so much. After the initial euphoria of contributing in a modest way to the artform which I have always loved, the financial and physical realities of making a full-time living from creating comics gradually became apparent.

But I am nothing if not resilient, and I have pressed on through good times and bad; through personal upheavals, bereavement and health troubles, to prestigious award nominations, potential movie deals, meeting my comics heroes and making new lifelong friends.

Strangehaven #1 hit the comic shops worldwide in a time before eBay, before the launch of Windows 95, before Se7en and Toy Story hit the cinemas, before anyone had heard the Spice Girls or Kula Shaker, before Dark Skies and Everybody Loves Raymond came onto our TV screens. So, like, a long time ago.

If you have been with me since the beginning, or you have joined me somewhere along the way, I can’t thank you enough for your continued faith and support.

The last quarter century has been a weird, wonderful and wild ride, and I don’t regret a moment of it. But, please, no congratulations on reaching this ‘milestone’ just yet – I don’t deserve an accolade merely for persistence - you can save those until I actually finish this bloody thing. Then we can talk about the tickertape parade.

Strangehaven volume 4, Destiny, is currently being serialised in full colour in the British anthology Meanwhile… from Soaring Penguin Press. Nine chapters (of thirteen) have been published to date.

Posted by Gary Spencer Millidge at 12:11

I like the fact that the gaps between issues of Meanwhile... are becoming Strangehavenesque in their length, it’s like a strange meta-commentary

Gary thank you for everything that you’ve done over the years. I’m a massive Twin Peaks fan and heard about Strangehaven whilst reading about that, I bought your very first issue when it came out and have been following your wonderful unfolding story ever since. I look forward to every next tale and cherish the gap until the next, just wonderful. Thank you for all of the cards over the years and for sharing your fantastic imagination :-)

I remember reading about Strangehaven in Cerebus, but I never followed up on it. Now's as good a time as any. I'm also a Child of Dave, he made my stuff No. 2 in his top ten list in Cerebus 200. I've been working at my own long-term project since 1991, so I have a few years on you; http://357deleted.blogspot.com/

Keep going: "Eternity is in love with the productions of time" said William Blake, and who's ever heard of him?

Hey Gary,
Congrats on the 25th anniversary of Strangehaven. I've been with you since issue 1. I remember picking it up at this small comics/coffee house that ONLY carried independent and Vertigo comics. No supers, it was great place but unfortunately only lasted about 5 years.
I hope you are felling better from your recent hospital stay.

I discovered the book thanks to the excerpt in Cerebus and was instantly hooked. An absolutely brilliant series, and one I was sorry to realize was on hiatus (like Shanower's Age of Bronze). Your Strangehaven is unique, intelligent, completely engrossing and beautifully drawn; I really look forward to the eventual volume 4. Congrats on a job well done!

Strangehaven has been one of my favorite series after the manager of my lcs introduced it to forever ago. I am so excited for the completion bid volume four. Thank you!

Hi Gary, I would love to get in touch with you to compare notes as I have been working on The Mice for almost 20 years. I'm scripting the final 80 pages now, which will bring it in at around 400.