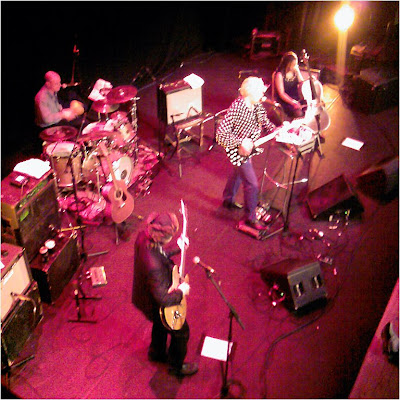 I’ve been racking my brains trying to remember the first time that I saw the mighty Robyn Hitchcock play live. I’m sure that it must have been with the Egyptians, although as former members often join him onstage, I have some doubts whether it was after their recording career.
It’s likely that it was one of his full-band gigs at the Cambridge Junction, or maybe in at Dingwall’s or the Highbury Garage. Hell, I can’t even remember where it was the last time I saw him. Maybe his terrific solo performance at the Colchester Arts Centre? Or the Boat Race where he played a stunning version of ‘Waterloo Sunset?’
But even though I can’t remember the order in which I’ve seen his gigs, every performance is a unique event, each distinctly etched in my mind – Hitchcock’s live show, drawing seemingly at random from an gargantuan 30-year back catalogue of self-penned material, constantly evolves; songs are given new arrangements, interspersed with surreal, improvised laugh-out-loud funny monologues.
Last night at the Junction 2 was no exception – the addition of cello to the usual triptych of guitar, bass and gave another dimension to the selection of songs chosen for the night’s performance. Robyn was on top form as always, his stories bringing laughter to even members of his own band, specifically cellist Jenny.
The addition of the ex-Soft Boys cohort Kimberly Rew for the final few numbers of the set was the energetic, fitful icing on yet another idiosyncratic, memorable cake of an evening with the amazing Mr. Hitchcock.
Robyn Hitchcock's news page