more by accident than design 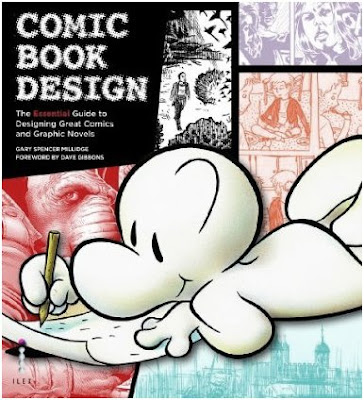 With news reaching me that my book Comic Book Design which I spent the best part of six months writing last year is now beginning to emerge at comic shops, bookstores and the usual Internet mail order retail outlets, I thought perhaps that it is a little overdue that my own blog should better make some mention of it.
This book is something that I consider to be one of my major works. Quite apart from writing approximately 40,000 words on the subject, I had to research, locate, select and scan several hundred appropriate images in an attempt to illustrate the points I was trying to make. Packaged in a lavish 10 ix 11 inch format it contains 160 full-colour pages and takes a design-oriented view of the creation of comic books, strip-mining the depth and breadth of comics history for its example illustrations.
It's not exactly a how-to book, although there are some nice examples of behind-the-scenes materials. It doesn't include anything much about drawing or anatomy or perspective. It's more about how comics work, how creators consciously or unconsciously design a character, a story, a page, a panel; and how it all comes together to form the unique visual storytelling that only comics can offer. There are sections on lettering and colour and publication design itself, and each section is punctuated by a designer spotlight on creators like Brian Wood and Chris Ware.
The book is image-heavy in the coffee-table tradition, featuring some of the stunning best examples of comic design across the spectrum of the medium, from superhero to slice of life, spanning a hundred years of comics. That's not to say that it's light on text, but it's generally presented in easily digestible chunks, resulting in what the publisher describes as a 'dip-in reference book. My intention is to provide instruction and more importantly, inspiration to artists and designers with a passing interest in comics, as well as broadening the horizons of neophyte and professional creators alike.
Interesting to note the differences between the cover of the UK version (at the top of this post) and the US version below, both of which were based on the same initial sketch I provided. 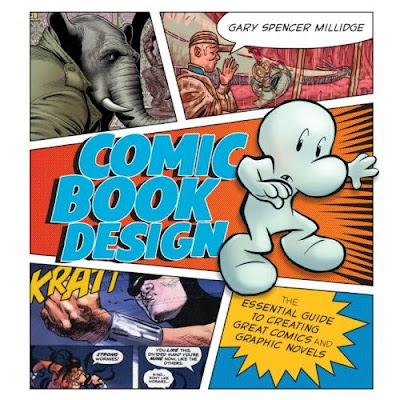 I think probably the cover of the UK edition more accurately reflects the design of the interior pages, and which also features French flaps and spot lamination to boot. I would post some interior pages too, but my scanner is playing silly buggers, my PDFs won't convert to jpegs and I've got to pack for Barcelona. Maybe later.
Comic Book Design is published by Ilex Press in the UK and Watson-Guptill in the US and should be available from any good comic or book retailer, in-store or online.
Posted by Gary Spencer Millidge at 17:10

Yo, so what? You work no more? Been a few years, pal! I'm dissapointed, bought the first strangehaven not long ago and thought maybe it was as big as it seemed. Apparently not, no more comics for a long time uh? Come on, man...