When I first played the Red Light Company album a couple of months ago, I immediately tried to buy tickets for one of their live shows. I was disappointed as all dates were sold out, so I bought a couple of tickets way in advance for last week's gig at London's Scala venue. 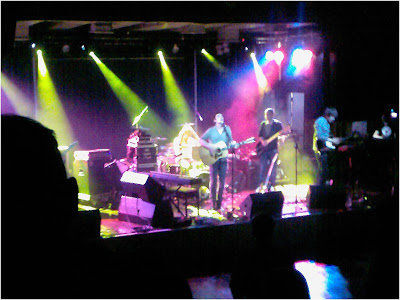 As I arrived reasonably early, I saw support band Animal Kingdom's entire set. I was hooked by the time they played their second number, which culminated in the stunning (if uncharacteristic) Chalk Stars. A highly polished, innovative performance and Richard Sauberlich's unusual falsetto singing was an added distinction. A name to look out for. 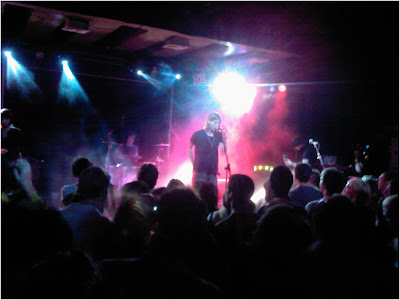 Red Light Company themselves rocked the house as you might expect. It's a tribute to the band's professionalism that I didn't notice they were a man down until about three-quarters of the way through their set. For some reason, regular bassist Shawn Day was missing, with the other band members swapping around instruments to fill in the gaps. The consistently high quality of the songs made the set sound like a greatest hits selection rather than a tour to promote their first album. It also surprised me when singer Richard Frenneaux announced that the modest capacity of the Scala was the largest audience the band had played to as headliners. This band ought to be - and most probably will be - absolutely huge.
After a bit of sedate stage diving by the blonde-haired singer and a short two song encore which included a cover of Mia's Paper Planes, they were gone. Try and catch them at a festival this summer.
Posted by Gary Spencer Millidge at 20:48

Email ThisBlogThis!Share to TwitterShare to FacebookShare to Pinterest
Labels: Music

Funny enough, one of my best mates got me into RLC, and he too was at the Scala last week (somehow managing to blunder into the VIP area too!).

The album is a real grower, and think they have the potential to be huge.

Hi there, since you liked Red Light Company you might be interested in checking out my blog:

it was in Italian at first but now I've switched to English so everyone can understand!